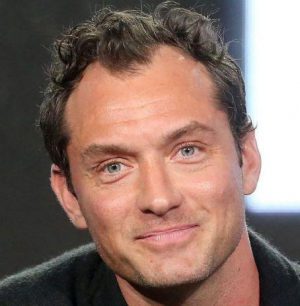 Jude is alive and kicking and is currently 49 years old.
Please ignore rumors and hoaxes.
If you have any unfortunate news that this page should be update with, please let us know using this .

Does Jude Law Have the coronavirus?

David Jude Heyworth Law is an English actor. He has received nominations for two Academy Awards, two Screen Actors Guild Awards, three Golden Globe Awards and two British Academy Awards, winning one. In 2007, he received an Honorary César and was named a Chevalier of the Order of Arts and Letters by the French government.
Law was born in Lewisham, South London, the second child of comprehensive school teachers Margaret Anne (née Heyworth) and Peter Robert Law; his father later became, according to Law, "the youngest headmaster in London". He has a sister, Natasha. Law was named after "a bit of both" the book Jude the Obscure and the Beatles song "Hey Jude". He grew up in Blackheath, an area in the Borough of Greenwich, and was educated at John Ball Primary School in Blackheath and Kidbrooke School, before attending Alleyn's School.

Law has also had an accomplished career on stage, and has received nominations for three Laurence Olivier Awards and two Tony Awards. He has performed in several West End and Broadway productions.
Law met actress Sadie Frost while working on the film Shopping. He and Frost married on 2 September 1997 and divorced on 29 October 2003. He has three children with her: two sons and a daughter Iris Law.
While filming Alfie (2004) in late 2003, Law and co-star Sienna Miller began a relationship and became engaged on Christmas Day 2004. On 8 July 2005, Law issued a public apology to Miller for having an affair with his children's nanny. Miller and Law broke up in November 2006.
On 29 July 2009, it was announced that Law would become a father for the fourth time, following a brief relationship with American model Samantha Burke in 2008. Burke gave birth to daughter Sophia in September 2009 in New York.
In December 2009, it was reported that Law and Miller had rekindled their relationship after starring in separate shows on Broadway, in late 2009. They spent Christmas 2009 in Barbados, along with three of Law's children. They announced they had split again in February 2011.
In October 2014, Law announced that Catherine Harding was pregnant with his fifth child, claiming at the same time that he and Harding were "no longer in a relationship". Their daughter Ada was born in March 2015.