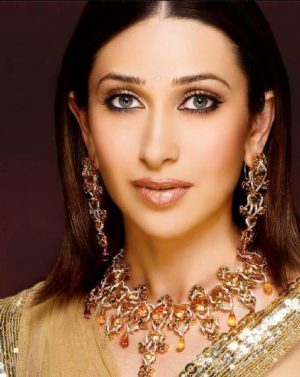 Karishma is alive and kicking and is currently 48 years old.
Please ignore rumors and hoaxes.
If you have any unfortunate news that this page should be update with, please let us know using this .

Does Karisma Kapoor Have the coronavirus?

Karisma Kapoor's father, Randhir Kapoor, is still alive and kicking at the age of 75. He is Indian and has had a career as a actor, producer, director.

Karisma Kapoor's mother, Babita Kapoor, is still alive and kicking at the age of 74. She is Indian and has had a career as a actress.

Karisma Kapoor is an Indian actress, who appears in Hindi films. One of the most popular and highest-paid actresses of India, Kapoor is particularly known for her work in the female-centric films and her film roles have been credited as a significant departure from the traditional portrayal of women in Hindi films. Kapoor is often regarded as the nation's most beautiful actress, and is the recipient of several accolades, including a National Film Award and four Filmfare Awards.
Her paternal grandfather was the actor and filmmaker Raj Kapoor, while her maternal grandfather was actor Hari Shivdasani. Her great-grandfather was actor Prithviraj. Kapoor is informally called as "Lolo" at her home. According to Kapoor, the name, Lolo, was derived after her mother made a passing reference to the Italian actress Gina Lollobrigida. Kapoor is of Hindu Punjabi descent on her father's side, and on her mother's side she is of Sindhi and British descent.

Kapoor was in a relationship with her Jigar co-star Ajay Devgn from 1992 till they broke up in 1995. She got engaged to Abhishek Bachchan in 2002, but the engagement was called off after a few months. This ended their relationship of a few years and no reason was given for the break-up.
On 29 September 2003, she married industrialist Sunjay Kapur, the CEO of Sixt India, in a high-profile Sikh wedding ceremony at her ancestral home, Krishna Raj Bungalow, in Mumbai. The couple has a daughter Samaira, born in 2005 and a son Kiaan born in 2010. In 2014, the couple filed for divorce through mutual consent. In November 2015, the couple had filed applications to withdraw their consent to it. The couple's divorce was finalised in 2016.