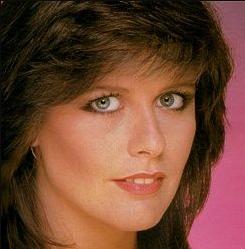 Kate is alive and kicking and is currently 63 years old.
Please ignore rumors and hoaxes.
If you have any unfortunate news that this page should be update with, please let us know using this .

Does Kate Robbins Have the coronavirus?

Kate Robbins (born 21 August 1958 in Margate, Kent) is an English actress, comedian, singer and songwriter. She came to prominence in the early 1980s when she scored a No.2 hit on the UK Charts with the song "More Than in Love", while she was appearing in the TV soap opera Crossroads. She went on to become a prolific voice actress, most notably for nine years with the satirical show Spitting Image.
Robbins is a first cousin once removed of Paul McCartney and older sister of fellow actress Amy Robbins (her mother and McCartney were first cousins). She attended Wirral Grammar School for Girls and won the Drama Prizes each year, notably with her monologue "All this glitters is not gold". Her first released recording, in 1978, was of the song "Tomorrow", owned by McCartney's music publishing company, from the musical Annie. Robbins' first chart appearance was as a backing singer, along with her sister Jane, on the minor Top 75 hit "Lines" by Liverpool group the Planets, a spin-off from Deaf School. Her profile was raised soon afterwards when both she and Jane represented the United Kingdom in the Eurovision Song Contest 1980 as part of the group Prima Donna. They finished third.

Robbins appeared in two series of the BBC Television comedy series Dinnerladies, playing the character 'Babs' a friend of 'Petula Gordeno' played by Julie Walters. Robbins later appeared with the sitcom's writer Victoria Wood in the BBC TV special Victoria Wood with All the Trimmings.
Robbins can also be heard as a voice-over artist on many commercials. She was the Edith Piaf soundalike on a lager advert. She was the 'Doris Day' voice on a Waitrose supermarket commercial. Her singing can be heard on television advertisements for Clover, Debenhams, First Choice Holidays and many more. She also recorded the Capital Radio jingle package for Sue Manning Productions.