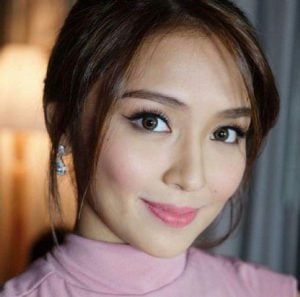 Kathryn is alive and kicking and is currently 26 years old.
Please ignore rumors and hoaxes.
If you have any unfortunate news that this page should be update with, please let us know using this .

Does Kathryn Bernardo Have the coronavirus?

Kathryn Chandria Manuel Bernardo is a Filipina actress. She is best known for her role as Mara in the primetime Filipino drama Mara Clara. Bernardo has been a contract artist of Star Magic and ABS-CBN since 2010 and most recently starred as Ana Bartolome in the 2011 drama film Way Back Home. She also played the protagonist Mikay in the primetime series Princess and I.
Bernardo studied at OB Montessori Center Inc. before her acting debut in 2003. She was home schooled, and currently attends Enderun Colleges, Taguig, where she studies marketing.

She starred in Princess and I, a romance/drama royalty-themed television series, following the success of Growing Up. With a cast flanked by Daniel Padilla as Gino Dela Rosa, Enrique Gil as Prince Jao and Bernardo as Mikay/Princess Areeyah, the teleserye is touted as one of the grandest, being the first Philippine show to be shot in Bhutan. Aside from Padilla and Gil as Bernardo's leading men on the show, Pilipinas Got Talent Season 3 former contestant Khalil Ramos played Mikay's unrequited lover and best friend Kiko. Other veteran actors like Gretchen Barretto and Albert Martinez joined the star-studded cast.
The show garnered unprecedented ratings and appraisal as the number one primetime show in September 2012, opening more doors for Bernardo's shining career. In August 2013, she and Daniel Padilla announcing another television series: Got to Believe in which Bernardo plays Chichay Tampipi, a teenage girl who reunites with her childhood friend Joaquin Manansala (Padilla) after many years; Chichay falls for the rich boy despite their economic differences and family pasts, encountering difficult obstacles that put their love to the test. Got to Believe was also a primetime television hit, gathering 38.6% percent in ratings during the broadcast of the show's final episode and placing at #2 on Kantar Media's nationwide TV ranking list.