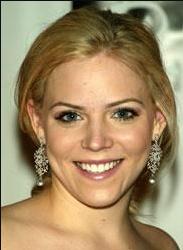 Katie is alive and kicking and is currently 38 years old.
Please ignore rumors and hoaxes.
If you have any unfortunate news that this page should be update with, please let us know using this .

Katherine "Katie" Rose Clarke (born August 25, 1984) is an American musical theater actress. Originally from Friendswood, Texas,She got her start acting at the United Methodist Church. Clarke is a graduate of Sam Houston State University. She first came to national attention for her portrayal of Clara Johnson in the Broadway production, the live PBS broadcast, and the national tour of The Light in the Piazza. She made her Broadway debut in The Light in the Piazza on December 9, 2005, at the age of 21, at the Vivian Beaumont Theater in New York City under the name "Katie Clarke". Clarke replaced Kelli O'Hara in the part of Clara Johnson, after O'Hara had left the show to play Babe Williams opposite Harry Connick, Jr. in The Pajama Game.