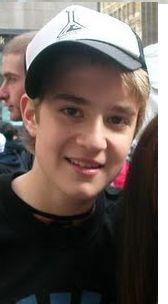 Kevin is alive and kicking and is currently 33 years old.
Please ignore rumors and hoaxes.
If you have any unfortunate news that this page should be update with, please let us know using this .

Does Kevin Alexander Clark Have the coronavirus?

Kevin Alexander Clark was born on December 3, 1988, in Highland Park, Illinois. He`s been playing the drums since the age of three but didn`t take private lessons until the 5th grade. He was so skilled in his preformances that each one demanded a standing ovation from the audience, and he`s been using his talents ever since.
He is an active member of the Highland Park High School`s concert band and also a member of its jazz bands. Not only does he have his drumming career mixed together with his acting career, he formed his own garage band where he plays the drums - and a little guitar and bass when needed. Kevin has composed several original pieces on computer and on guitar. He was introduced to acting at the age of 13, playing one of the rocking kids, Freddy Jones, in Paramount Pictures` The School of Rock (2003) with Jack Black and Joan Cusack. The film had a number-one opening weekend, October 3rd, 2003, in the USA.In regards to his acting career, Clark stated that his next big project was to "finish high school."

He graduated from Highland Park High School in 2007 and currently resides in his hometown of Highland Park, Illinois. He has recently appeared as a guest drummer for up-and-coming rock/alternative artist and Highland Park native Robbie Gold, and is a member of The Robbie Gold Band.