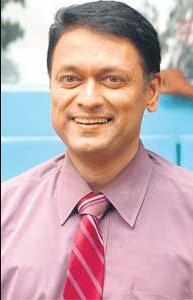 Kiran Karmarkar is alive and kicking and is currently 64 years old.
Please ignore rumors and hoaxes.
If you have any unfortunate news that this page should be update with, please let us know using this .

Kiran Karmarkar is an Indian television, film and theatre actor. He is popularly known for his portrayal of the character Om Agarwal in the television saga Kahaani Ghar Ghar Kii (2000 - 2008) that aired on Star Plus.
Karmarkar started his acting career through Marathi theatre and various cameos on television and commercial advertisements. His first major role came in the show Ghar Ek Mandir directed by Ekta Kapoor. He became popular for his role of Om Agarwal opposite actress Sakshi Tanwar in the show Kahaani Ghar Ghar Kii. The show aired on Star Plus and started in 2000. After the script killed the character, Karmarkar was no longer seen in it. But due to later changes in the script, the character was retrieved and he was seen playing the same role in 2007.

He then went on to play various roles in TV shows. His 2006 role in the show Saarathi was of a business tycoon, inspired by Sabeer Bhatia. In 2012, he joined the popular show Uttaran playing a negative role of Tej Singh.
Karmarkar is married to actress Rinku Karmarkar née Dhawan who played his sister in the show Kahaani Ghar Ghar Kii.