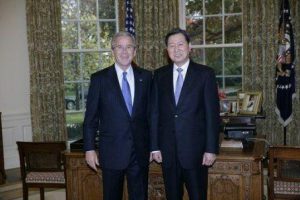 Lee is alive and kicking and is currently 77 years old.
Please ignore rumors and hoaxes.
If you have any unfortunate news that this page should be update with, please let us know using this .

Lee Tae-sik (born 26 October 1945) is a South Korean diplomat. He graduated from Seoul National University's Department of International Relations in 1970. He then joined the Ministry of Foreign Affairs and Trade, and was employed as first secretary in the South Korean embassy in Washington, D.C. from 1981 to 1984. He later went on to pursue a higher degree at the Johns Hopkins School of Advanced International Studies, graduating in 1988. His first ambassadorial-rank posting was to Israel, from 2000 to 2002. He returned to South Korea to serve as Deputy Minister of Foreign Affairs until the following year when he became ambassador to the United Kingdom. In 2005 he had a brief stint back in Seoul as Vice Minister of Foreign Affairs and Trade, before being named as South Korea's ambassador to the U.S. in October 2005. He served in that position until March 2009, when he was replaced by Han Duck-soo.