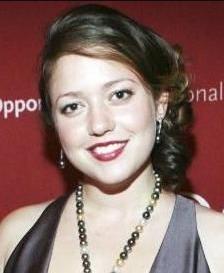 Liesel is alive and kicking and is currently 38 years old.
Please ignore rumors and hoaxes.
If you have any unfortunate news that this page should be update with, please let us know using this .

Does Liesel Matthews Have the coronavirus?

Robert's information is not available now.

Irene's information is not available now.

Liesel Matthews was born on March 14, 1984 in Chicago, Illinois, USA as Liesel Anne Pritzker. She is an actress, known for Air Force One, A Little Princess (1995) and Blast (2000). She is married to Ian Simmons. Liesel Pritzker uses the name "Liesel Matthews" as an actor on stage and screen, first to honor her brother Matthew, and second to avoid conflict between her divorced parents about whether she should incorporate her stepfather's name and be known as Liesel Pritzker-Bagley.
In 2002, Pritzker, then a first-year student at Columbia University, filed a six billion dollar lawsuit against her father and eleven older cousins, claiming they had misappropriated money from trusts established for her and her brother Matthew Pritzker. In early 2005, the parties settled the lawsuit, which followed another suit that had begun the process of splitting the family fortune eleven ways.

That result placed eleven Pritzkers into the Forbes 400, the most from any single family. Under the settlement, Liesel and Matthew each received roughly U.S. $280 million in cash and were given more control over other trusts valued at about U.S. $170 million each. Pritzker is married to Erie Canal-heir Ian Simmons and resides with her husband in the Boston, Massachusetts area.