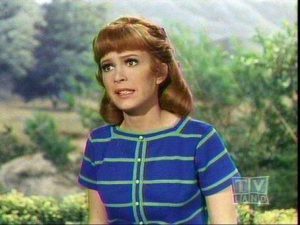 Linda is alive and kicking and is currently 77 years old.
Please ignore rumors and hoaxes.
If you have any unfortunate news that this page should be update with, please let us know using this .

Does Linda Henning Have the coronavirus?

Linda Kaye Henning is an American actress and singer most notable for starring in the 1960s sitcom Petticoat Junction. She made many TV appearances during the 1960s and 1970s on a variety of programs. She appeared in guest roles in network television shows including The Ed Sullivan Show, Adam-12, Happy Days, Mork & Mindy, and The Tonight Show. She also provided the voice of Jethrine Bodine in The Beverly Hillbillies.
Her most notable role was as Betty Jo Bradley in the CBS series Petticoat Junction, which ran from 1963 until 1970. She was only one of three cast members, along with Edgar Buchanan and Frank Cady, to remain throughout the show's entire run and appeared in all but three of the 222 episodes (the exceptions being the season one episode "Bobbie Jo and The Beatnik", the season two episode "Have Library, Will Travel" and the season five episode "The Power of the Press").

She was billed for the first five seasons of the series as Linda Kaye. From season six (fall 1968) until the show was cancelled, she was billed by her full name. In some episodes in later years, Henning and her television sisters (played by Meredith MacRae and Lori Saunders) sang in a trio, and she often sang duets with co-star Mike Minor, who played Steve Elliott.
In 1968, a year after Henning's screen marriage to Mike Minor's character in Petticoat Junction, the couple married in real life. They divorced in 1973.