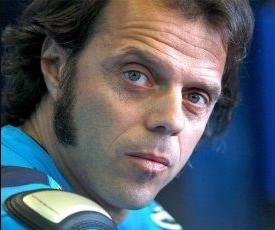 Loris is alive and kicking and is currently 49 years old.
Please ignore rumors and hoaxes.
If you have any unfortunate news that this page should be update with, please let us know using this .

Loris Capirossi (born April 4, 1973 in Castel San Pietro Terme, Bologna) is a retired Italian Grand Prix motorcycle road racer, who competed between 1990 and 2011. He is a former 250cc World Champion for Aprilia, and is the first Grand Prix rider to make at least 300 race starts, having made his 300th start at the 2010 season-opening Qatar Grand Prix.
The 1995 season was Capirossi's first season in the top-level 500cc championship. He was aboard a Pileri Honda, and although he often qualified better than he raced, he still took 6th in the championship. In 1996 Capirossi retired from five of the first seven races, but thereafter he was often in the points and won the final race in Australia riding for Wayne Rainey's Yamaha team.

2008 was a less competitive season due to many weak results during the season. The only podium Capirossi had was in Czech Republic at Brno. In Spain, Capirossi was injured and missed two races. He finished the season in tenth place, his lowest position since 1996. In 2009, his season started with a crash in Qatar when he was in second place. In Italy, Capirossi fought with Stoner for first place but fell to fifth due to his slower Suzuki on the main straight. He finished the season in ninth place without a podium for the first time since 1992. On 11 April 2010, Capirossi became the first rider in the history of the sport to start 300 races, when he finished ninth in the season-opening Qatar Grand Prix. The rest of his campaign was plagued by retirements and injury. For 2011 Capirossi announced that he would ride for the Ducati Pramac Team.
On 1 September 2011, Capirossi announced that he would retire from MotoGP racing, at the end of the 2011 season.
Capirossi is a member of the 'Champions for Peace' club, a group of more than 90 famous elite created by Peace and Sport, a Monaco-based international organization placed under the High Patronage of H.S.H Prince Albert II. This group of top level champions, wish to make sport a tool for dialogue and social cohesion.
Married to Ingrid Tence, the couple reside in Monaco. Their first child, a boy named Riccardo, was born on 2 April 2007.