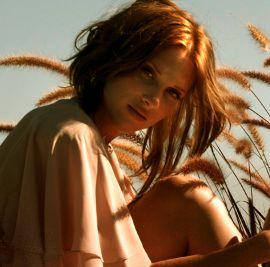 Lucy is alive and kicking and is currently 40 years old.
Please ignore rumors and hoaxes.
If you have any unfortunate news that this page should be update with, please let us know using this .

Does Lucy Walsh Have the coronavirus?

Lucy Walsh's father, Joe Walsh, is still alive and kicking at the age of 74. He is American and has had a career as a musician.

Lucy Walsh is an American actress, singer, songwriter, and pianist. She is the daughter of Eagles' guitarist Joe Walsh, and the niece of Ringo Starr. Lucy is also a classically trained pianist and a professional singer and songwriter. She grew up in a musical family, her father is Joe Walsh of The Eagles (she was named “Favorite Rockstar Daughter” by CBS NEWS, her Uncle (by marriage) is Ringo Starr of The Beatles, and her Grandmother was a pianist for the New York City Ballet. Last year when Lucy’s dad was awarded the Kennedy Center Honor by President Barack Obama and First Lady Michelle Obama, she attended the White House by his side. Signed to Island Def Jam by Jay-Z and L.A. Reid, Lucy has toured internationally with her music, most recently with Maroon 5, One Republic and Bruno Mars.
She has performed on National Television with MTV's hit series Rock The Cradle, earning the highest judge's score of the season. Judge Larry Rudolph said that "the hairs on his arms were standing up: after hearing her. She received a "Perfect 10 from Rudolph for her performance of Don Henley's "The Heart of the Matter". Fellow judge Brian L. Friedman said, "Lucy was untouchable... magical, I was in her soul."

Lucy has sung the National Anthem at numerous events, including Dodger Stadium, UCLA’S Angel City Games hosted by Mayor Eric Garcetti, and for President Bill Clinton, Maria Schriver, and Tiger Woods. Lucy has been featured on numerous artists albums, including Secondhand Serenade and Roy Orbison’s Under The Sheets tribute record. Her music has been recorded by multiple recording artists, in several languages, and her original songs have over 1 million plays online.
She is also known for her role on the 9th season of Curb Your Enthusiasm opposite Elizabeth Banks and Larry David, Walsh has also recently appeared on Criminal Minds playing the head cop and directed by the shows Tony winning star Joe Mantegna. Lucy has also Guest Starred on NCIS and her feature films include the horror hit No Solicitors opposite Eric Roberts, and Garry Marshall’s final film Mother's Day opposite Jason Sudeikis. Lucy also has her original song "Winter Coat" included in the film, during Julia Roberts iconic throwback to "Pretty Woman" scene.