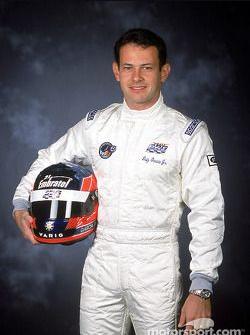 Luiz is alive and kicking and is currently 51 years old.
Please ignore rumors and hoaxes.
If you have any unfortunate news that this page should be update with, please let us know using this .

Luiz Garcia, Jr. (born May 4, 1971) is a Brazilian race car driver born in Brasilia. He raced in Brazilian Formula Ford 1600 in 1991 and British Formula Vauxhall in 1992 and 1993.In 1994 and 1995, he raced on European Formula 3. He then raced in the Indy Lights series in 1997 and 1998 finishing 13th and 12th in series points in his two seasons, capturing a single win in 1998 at Cleveland. He made his CART debut at the 1999 season opener at Homestead-Miami Speedway for Dale Coyne Racing. After 7 races with Coyne he moved to Hogan Racing where he made three more starts. In 2000 he returned and ran a full season in the #25 Arciero Project Racing Group Reynard-Mercedes sponsored by Brazilian companies Hollywood and Embratel. He scored 6 points, good enough for 27th in the championship, with a best finish of 11th at the Michigan 500. He returned for the first two races of the 2001 season with Coyne before poor finishes and a lack of funding ended his CART career. He has not driven in a major professional auto race since his last CART appearance.