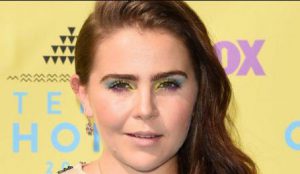 Mae is alive and kicking and is currently 33 years old.
Please ignore rumors and hoaxes.
If you have any unfortunate news that this page should be update with, please let us know using this .

Does Mae Whitman Have the coronavirus?

Mae Whitman's mother, Pat Musick, is still alive and kicking at the age of 65. She is American and has had a career as a voice actress.

Mae Margaret Whitman is an American actress, voice actress and singer. After making her film debut in When a Man Loves a Woman, she had other supporting roles in films such as One Fine Day (1996), Independence Day (1996), and Hope Floats (1998). Thereafter, Whitman ventured into television, with her most notable roles including Ann Veal on the Fox sitcom Arrested Development (2004-2006) and Amber Holt on the NBC drama Parenthood (2010-2015). She also had supporting roles in the films Scott Pilgrim vs. the World (2010) and The Perks of Being a Wallflower (2012). Whitman made her leading role film debut in The Duff (2015).