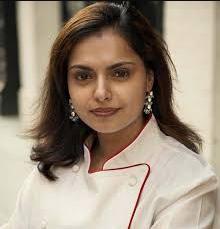 Maneet is alive and kicking and is currently 46 years old.
Please ignore rumors and hoaxes.
If you have any unfortunate news that this page should be update with, please let us know using this .

Maneet Chauhan is a US-based television personality. Previously the Executive Chef of several notable restaurants in Chicago and New York, she is featured as a judge on Chopped.
Right after graduation in 2000 she was hired as management for a startup restaurant in Cherry Hill, New Jersey, where she headed a team and expanded the restaurant's capacity from 70 seats to 140 seats. In 2003, at the age of 27, she became the opening executive chef of Vermilion in Chicago, Illinois, earning her 3-Stars from The Chicago Tribune. In 2007, she moved to NYC to open At Vermilion where she was nominated as the 'Best Import to New York' by Time Out Magazine. Her style is described as "global fusion" with roots in Indian cuisine.

She has written her first cookbook, Flavors of My World: A Culinary Tour Through 25 Countries, published by Favorite Recipes Press, an imprint of Nashville-based Southwestern Publishing Group. She conducted a 21-city bus tour across the U.S. to promote the book and was noted as one of the Cookbooks of the Year. Her other book (electronic, publisher: Alta Editions), authored with Katy Sparks, Alex Raij, Rita Sodi and Kathleen Squires, called The Journey, won the award from International Association of Culinary Professionals 2014.
Chauhan opened her first restaurant in Nashville, Tennessee. It is called "Chauhan Ale and Masala House" and the location is 123 12th Ave North in The Gulch Area. The restaurant, which accommodates 150, opened in August 2014.