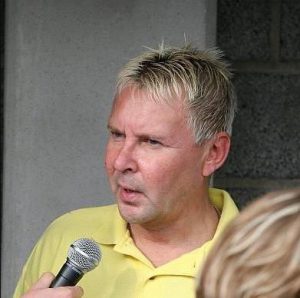 Matti passed away on February 4, 2019 at the age of 55 in Lappeenranta, Finland. Matti's cause of death was diabetes and illness.

Matti Ensio Nykänen (born 17 July 1963) is a Finnish former ski jumper who won five Olympic medals (four gold), nine World Championship medals (five gold) and 22 Finnish Championship medals (13 gold). Most notably, he won three gold medals at the 1988 Winter Olympics, becoming, along with Yvonne van Gennip of the Netherlands, the most medaled athlete at that Olympiad.
Nykänen met millionaire sausage heiress Mervi Tapola in 1999, and they were married from 2001 to 2003. They were divorced in 2003, and remarried in 2004. This marriage was tempestuous and gave rise to many well-publicised incidents: The first reported assault against Tapola occurred in June 2000, following which a restraining order was imposed upon Nykänen. In 2004, Nykänen was handed a suspended sentence for assaulting Tapola again. Nykänen had already been accused of assaulting Tapola in 2001, but the charges were withdrawn because Tapola exercised her right to remain silent.

In September 2005, while on probation for another assault, Nykänen was re-arrested four days after his release for again abusing his partner. Nykänen was convicted again and imprisoned for four months on 16 March 2006. Soon after that he stabbed a man in a pizza restaurant in Korpilahti. In the summer of 2009, Tapola (then Tapola-Nykänen) petitioned for divorce a 14th time, but cancelled it.
On Christmas Day 2009, Nykänen allegedly injured his wife with a knife and tried to throttle her with a bathrobe belt. He was charged for attempted manslaughter and held in custody by Tampere police, but was released on 28 December after charges were dropped for insufficient evidence. On 24 August 2010, Nykänen was convicted of grievous bodily harm and sentenced to 16 months in prison and ordered to pay €5,000 in compensation to his wife for pain and emotional suffering, and €3,000 for legal expenses. In August 2010, Tapola made a 15th request for divorce.