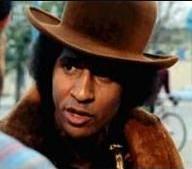 Max is alive and kicking and is currently 77 years old.
Please ignore rumors and hoaxes.
If you have any unfortunate news that this page should be update with, please let us know using this .

Max Julien (born January 1, 1945), is an American actor, best known for his role as Goldie in the 1973 blaxploitation film, The Mack. He also appeared in Def Jam's How to Be a Player and has guest starred on TV shows such as The Mod Squad and One on One.
For his performance in 1968's Up Tight!, New York Times movie critic Judith Crist stated that Julien was "a standout in a standout cast." Raoul Gripenwaldt from the Santa Monica Evening Outlook once wrote: "Max Julien's portrayal of Johnny Wells in Paramount's Uptight could very well result in an Academy Award." The Hollywood Reporter chimed in: "Max Julien creates a memorable piece of reality." As a reward he was invited to Europe to discuss film possibilities.

Julian was in a live-in relationship with actress Vonetta McGee, who appeared with him in the western action film "Thomasine & Bushrod", which was intended as a counterpart to the 1967 film Bonnie and Clyde, during the early-to-mid 1970s.