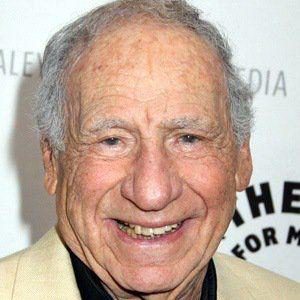 Mel is alive and kicking and is currently 95 years old.
Please ignore rumors and hoaxes.
If you have any unfortunate news that this page should be update with, please let us know using this .

Does Mel Brooks Have the coronavirus?

Mel Brooks was born Melvin Kaminsky on June 28, 1926 in Brooklyn, New York. He served in WWII, and afterwards got a job playing the drums at nightclubs in the Catskills. Brooks eventually started a comedy act and also worked in radio and as Master Entertainer at Grossinger's Resort before going to television.He was a writer for, Your Show of Shows (1950) Caesar's Hour (1954) and wrote the Broadway show Shinbone Alley. He also worked in the creation of The 2000 Year Old Man (1975) and Get Smart (1965) before embarking on a highly successful film career in writing, acting, producing and directing.Brooks is famous for the spoofs of different film genres that he made such as Blazing Saddles (1974), History of the World: Part I (1981), Silent Movie (1976), Young Frankenstein (1974), Robin Hood: Men in Tights (1993), High Anxiety (1977), Dracula: Dead and Loving It (1995), and Spaceballs (1987).
On December 5, 2009, Brooks was one of five recipients of the 2009 Kennedy Center Honors at the John F. Kennedy Center for the Performing Arts in Washington, DC. He was inducted into the Hollywood Walk of Fame on April 23, 2010 with a motion pictures star located at 6712 Hollywood Boulevard. American Masters produced a biography on Brooks which premiered May 20, 2013, on PBS.

The AFI presented Brooks with its highest tribute, the AFI Life Achievement Award, in June 2013. In 2014 Brooks was honored in a handprint and footprint ceremony at TCL Chinese Theatre. His concrete handprints include a six-fingered left hand as he wore a prosthetic finger when making his prints. On March 20, 2015, Brooks was awarded a British Film Institute Fellowship from the British Film Institute.
Brooks was married to Florence Baum (1926-2008) from 1953-1962, their marriage ending in divorce. They had three children: Stephanie, Nicky, and Eddie. Brooks married stage, film and television actress Anne Bancroft in 1964, and they remained together until her death in 2005. They had met at a rehearsal for the Perry Como Variety Show in 1961, and were married three years later on August 5, 1964, at the Manhattan Marriage Bureau. Their son, Max Brooks, was born in 1972, and their grandson, Henry Michael Brooks, was born in 2005.