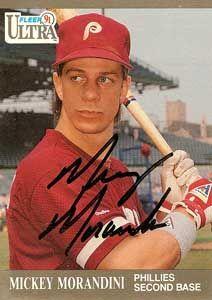 Michael is alive and kicking and is currently 56 years old.
Please ignore rumors and hoaxes.
If you have any unfortunate news that this page should be update with, please let us know using this .

Michael Robert "Mickey" Morandini (born April 22, 1966) is a former All-Star second baseman who played for the Philadelphia Phillies, Chicago Cubs, and Toronto Blue Jays of Major League Baseball, and the current coach of the AAA-level Lehigh Valley Iron Pigs. He played in the 1993 World Series as a member of the Phillies, and the 1998 National League Division Series as a member of the Cubs.