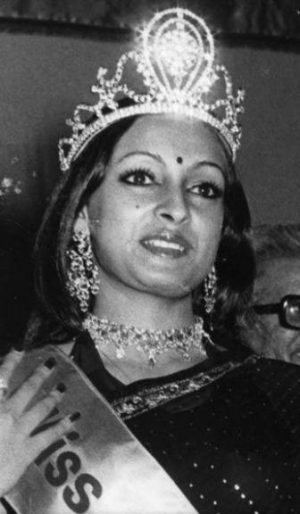 Naina is alive and kicking and is currently 63 years old.
Please ignore rumors and hoaxes.
If you have any unfortunate news that this page should be update with, please let us know using this .

Naina Balsaver Ahmed (born 1959) is an Indian actress, model and winner of Femina Miss India 1976.Early Life and Pageantry Naina Balsaver was born in Uttar Pradesh. In the year 1976 she competed in Femina Miss India pageant and eventually won the coveted crown. She was appointed to represent India at Miss Universe 1976 and Miss World 1976 pageants. However she did not compete in Miss World 1976 due to protest against the presence of two South African entries - one white and one black - in conformity with the apartheid policy of racial separation. The same year, she competed at Miss Universe pageant but remained unplaced.She is the only Femina Miss India winner who carried the both Femina Miss India Universe and Femina Miss India World titles.Career She acted in Bollywood films. She acted in the television soap opera, Manzil. She contested on BSP ticket against N. D. Tiwari but lost the election.Jewelry She is a jewelry designer.Personal life She married twice, first when she was 19. She later married Akbar Ahmed, a politician and real estate developer.