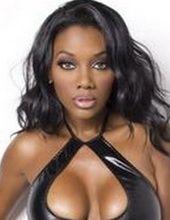 Naomi Banxx is alive and kicking and is currently 50 years old.
Please ignore rumors and hoaxes.
If you have any unfortunate news that this page should be update with, please let us know using this .

Her stage name was derived from the names of supermodels Naomi Campbell and Tyra Banks. Banxxx produced and starred in the 2010 mainstream independent film Caught in the Game, which she released through her own company, That's Common Productions.
Banxxx co-hosted the Urban X Awards alongside Alexander Devoe in 2011 and 2012. As of 2013, Banxxx was the host of a show titled Chocolate Radio on Sirius XM Radio. She also owns a record label called FBC Records.