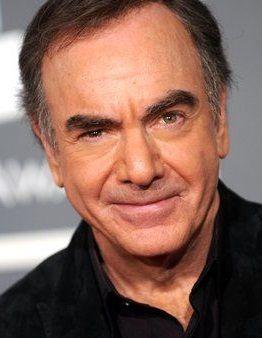 Neil is alive and kicking and is currently 81 years old.
Please ignore rumors and hoaxes.
If you have any unfortunate news that this page should be update with, please let us know using this .

Does Neil Diamond Have the coronavirus?

Neil Leslie Diamond is an American singer-songwriter and musician with a career that began in the 1960s. Diamond has sold over 125 million records worldwide, making him one of the world's best-selling artists of all time. He is the third most successful adult contemporary artist on the Billboard charts behind Elton John and one-time duet partner Barbra Streisand. His songs have been covered internationally by many performers from various musical genres.
Diamond has been married three times. In 1963, he married his high-school sweetheart, schoolteacher Jaye Posner. They had two daughters, Marjorie and Elyn. They separated in 1967 and divorced in 1969. In 1969, Diamond married production assistant Marcia Murphey. They had two sons, Jesse and Micah. The marriage lasted 25 years, ending in 1994 or 1995.

In 2012, Diamond married his manager, Katie McNeil, in front of family and close friends in Los Angeles. Seven months earlier, on September 7, 2011, in a message on Twitter, the 70-year-old Diamond had announced his engagement to the 41-year-old McNeil. Diamond said that his 2014 album Melody Road was fueled by their relationship, explaining: "There's no better inspiration or motivation for work than being in love. It's what you dream of as a creative person. I was able to complete this album – start it, write it and complete it – under the spell of love, and I think it shows somehow." In addition to serving as Diamond's manager, McNeil produced the documentary Neil Diamond: Hot August Nights NYC.
In 1996, Diamond began a lengthy, live-in relationship with Australian Rae Farley after the two met in Brisbane, Australia. The songs on Home Before Dark were written and composed during her struggle with chronic back pain.