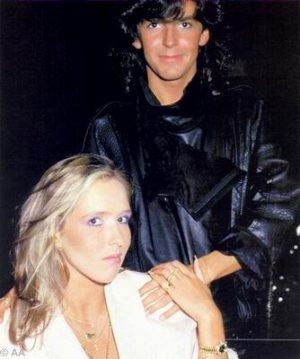 Nora-Isabelle is alive and kicking and is currently 58 years old.
Please ignore rumors and hoaxes.
If you have any unfortunate news that this page should be update with, please let us know using this .

Nora Balling (born July 31st, 1964 in Koblenz, Germany) is a German woman, the first wife of the singer and ex-Modern Talking member, Thomas Anders, between 1985 and 1999. Balling was the guilty of the group split in 1987, by its continous attempts to figure. Balling was the bride of a Thomas Anders mate, called Stefan. Despite she was very young, she inherited a big quantity of money of his uncle.She met Thomas Anders in 1983, a few time later he started his music career, publishing songs as "Du Weinst Um Ihn". She fell in love deeply with him.
Balling appeared in the "Heißkalter Engel" music video. Some time later, she left Stefan to get engaged with Anders. Thomas Anders requested marriage to Balling at August 6th, 1984, however, that November 5th, Balling`s mother died. Also, they suffered a road accident, at November 12th, 1984, but nobody got injured, but the car got unrecognizable. Balling married with Thomas Anders December 28th, 1984, and their second wedding was that July 27th, 1985 in Koblenz, Germany. Her wedding gift was the famous necklace NORA, which was a recurrent mocks point.

By the end of 1984 Dieter Bohlen and Thomas Anders founded Modern Talking, which produced many successful songs like "You`re My Heart, You`re My Soul" and "Brother Louie". By the 1987 fall, the end of Modern Talking was near. Due to several discrepancies between Balling and Bohlen - like Yoko Ono and The Beatles - Modern Talking split up, because Balling highly interfered on the group subjects, wanting to receive more attention. When Modern Talking was going to get outta the concerts, there were many people groups, which shoot tomatos to the group and Balling. Is logic to say that if Balling didn`t interfered between Thomas Anders and Dieter Bohlen`s friendship, the band would have continued. However, Nora Balling explained the group split as follows:The split is not due to fights between them. The thing what happens is that their personalities are very different. Dieter likes to go to night clubs with womans. We, in return, are very quiet.
Anders took a break and went to live with Balling to Los Angeles, California, specifically on the old Clark Gable house. However, he decided to comeback a little time later. Started gigs under the name "Modern Talking Last Concert Tour", including Nora in his choir. But Balling fell in love with other man, because Anders didn`t served her to figure yet. By the 1998 winter, Balling came back from the United Stated to Germany to divorce of Thomas Anders. She lived during this time in Munich. By February 1999 they divorced officially. Balling didn`t would can come back to Thomas Anders home in Los Angeles, California, because she lost it`s rights to do it. Later, Anders married with Claudia Hess, and confessed that the necklace was fused and was put on a valut.