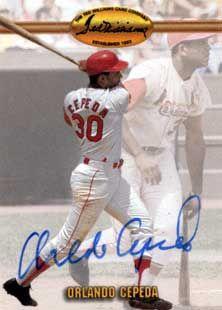 Orlando Manuel "Peruchin" Cepeda Pennes (born September 17, 1937) is a Puerto Rican former Major League Baseball first baseman and a member of the National Baseball Hall of Fame in Cooperstown, New York. The 1958 National League Rookie of the Year, Cepeda was voted the National League Most Valuable Player in 1967, the year his team, the St. Louis Cardinals, won the World Series. Overall, he appeared in three World Series and was the first winner of the American League's Outstanding Designated Hitter Award in 1973. He batted .300 or better 10 times in the 14 seasons he appeared in over 100 games, much of it played in what is now called the "Second Deadball Era."