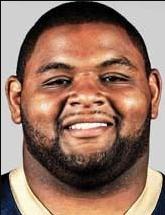 Orlando is alive and kicking and is currently 47 years old.
Please ignore rumors and hoaxes.
If you have any unfortunate news that this page should be update with, please let us know using this .

Orlando Lamar Pace (born November 4, 1975) is a former American college and professional football player who was an offensive tackle in the National Football League (NFL) for thirteen seasons. He played college football for Ohio State University, and was twice recognized as an All-American. He was drafted by the St. Louis Rams, first overall in the 1997 NFL Draft, and played professionally for the Rams for twelve years. Pace started all 16 regular season games eight times in his pro career, and blocked for three straight NFL MVPs (Kurt Warner in 1999, 2001; and Marshall Faulk in 2000).
He was the cornerstone of a Rams offensive line that blocked for an offense that compiled more gross yards than any other team during his 12 years in St. Louis (50,770 in 12 seasons), finished second in completion percentage (61.8 percent) and fifth in touchdown passes (289) over that time. Under Pace's protection, the Rams' passing offense compiled more than 3,000 yards in all 12 of his NFL seasons, seven different quarterbacks eclipsed the 3,000-yard mark in a season, including three times surpassing the 4,000-yard mark, and blocked for seven 1,000-yard rushers. Pace started 154 consecutive games.

Pace owned "Big O's Ltd" in his home town of Sandusky, Ohio. It was a family-friendly sports bar located on W. Perkins Avenue. Pace liked to make appearances at his restaurant, occasionally signing autographs for his hometown fans. Big O's Ltd has since been closed however.
Pace was inducted into the Rose Bowl Hall of Fame on December 30, 2013, at the Pasadena Convention Center.
Pace was a finalist in the 2015 Hall of Fame induction class and his second year of eligibility has made the final 15. On February 6, 2016, he was elected to the Pro Football Hall of Fame.