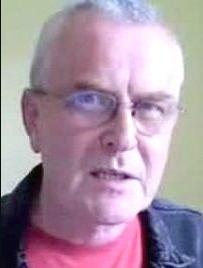 Pat is alive and kicking and is currently 73 years old.
Please ignore rumors and hoaxes.
If you have any unfortunate news that this page should be update with, please let us know using this .

Patrick "Pat" Condell (born 23 November 1949) is a writer, polemicist, and former stand-up comedian. In his early career he wrote and performed in alternative comedy shows during the 1980s and 1990s in London, winning the Time Out Comedy Award in 1991. He was also formerly a regular panelist on BBC Radio 1's Loose Talk programme.
In early 2007 he began uploading to the internet short filmed monologue polemics primarily about religious authority, authoritarianism in government and left-wing politics, and the societal effects of Muslim immigration into Europe, which have featured on the front pages of websites such as YouTube and LiveLeak. They have also been published on DVD, and also as a book of video transcripts. As of June 2017, Condell's YouTube channel has over a third of a million subscribers, with over 70 million views.

From 1991 to 1994 Condell was a regular panellist on BBC Radio 1's Loose Talk. During the mid-1990s, he was performing over 200 times a year. Due to the late nights and regular travelling he decided to start writing for other comedians, while still doing the occasional performance. In 1991 he performed comedy sketches with other comedians at the Duke of York's Theatre in a show put on to raise funds for Amnesty. A recording of the show was released on VHS as Barf Bites Back! (1991).
His 2006 stand-up show Faith Hope and Sanity, subtitled "A Few Jokes About Religion Before It Kills Us All," was a platform for his comedy and atheist beliefs. "This is the first time I’ve set out to write a show in order to say something, rather than just as a vehicle for stand-up" he said of the show. He performed the show at London’s Etcetera Theatre. Chortle gave Condell's 2006 show a negative review, noting that Condell is covering familiar territory but "is not quite up to the job," and observing that Condell's material was delivered "with very little variation in pace or tone, ... with the feel of a lecture" and "no structure, no building up to a passionate, climactic conclusion, no ebb and flow of storytelling." Chortle concluded that "Condell is still going through the motions."