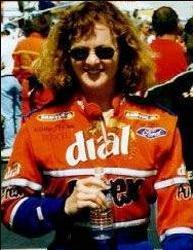 Patty is alive and kicking and is currently 62 years old.
Please ignore rumors and hoaxes.
If you have any unfortunate news that this page should be update with, please let us know using this .

Patricia Moise-Sawyer is a former NASCAR driver. She drove in five Winston Cup races from 1987 to 1989, and 133 Busch Series races from 1986 to 1998. She is the wife of former fellow NASCAR driver Elton Sawyer.Moise began racing at the age of 16, when she drove road course races in the IMSA series. She made her Busch Series debut in 1986 at Road Atlanta, driving the #47 Citgo/Red Roof Inns Buick Regal for Randy Hope. She qualified third and finished 30th due to engine problems on the first lap. She ran another Busch race that season at North Carolina Speedway, finishing 34th. She also became the first woman to lead a Busch Series event.In 1987, she fielded her own team, the #37 Red Roof Inns Buick. She posted two top-tens in twelve starts, but also had six DNF's, finishing 31st in points. She also made her Cup debut at Watkins Glen in the #89 Butter-flavored Crisco Chevrolet owned by Marc Reno and Ernie Irvan. She finished 33rd after a crash.The next season, she dropped to 34th in points and did not finish in the top-ten in eleven starts. She also ran two Cup races for Hope that year, the Pepsi 400 and at Watkins Glen, with her best finish being a 26th. In 1989, she switched to the #45 Buick with sponsorship from Amway/Freedom Fuel Additive. She posted two sixteenth-place runs and finished 35th in points. She also made her final two Cup starts, at Daytona and Talladega in her own car. Her best finish was 33rd.In 1990, she sold her team to Mike Laughlin and made the most starts of her career, 24. Despite not finishing in the top-ten, she finished a career-high 22nd in points at season's end. During the season, she married her husband Elton, whom she joined as a teammate part-time the following season at Dilliard Racing, where her best finish was a 15th at Dover. She only made one race the next season, finishing 14th in her own #42 at Watkins Glen. In 1994, she ran six races for Doug Taylor, who signed her to drive the next season. With sponsorship from Dial/Purex, she had a seventh-place run at Talladega in the #40 Ford and finished 25th in points. Unfortunately, she was released, and Sawyer started a team for her, the #14. Moise ran 18 races and finished 37th in points. She ran one race the next year in the car at Dover, but wrecked early in the race.In 1998, her team was purchased by Michael Waltrip Racing, and she signed to drive the car with sponsorship from Rhodes Furniture. Despite a top-ten at Bristol, she had trouble making races and finished 37th in points. She has not raced in NASCAR since.