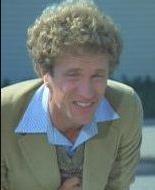 Paul Ryan Rudd (born Paul Kenneth Rudd; May 15, 1940 – August 12, 2010) was an American actor, director, and a professor. He appeared as the title character in a 1976 production of Shakespeare's Henry V, opposite Meryl Streep as his love interest. Though best known for his live theatre performances, such as those on Broadway and the New York Shakespeare Festival, he also appeared in the 1978 film The Betsy and on television in the 1975 short-lived series Beacon Hill as Brian Mallory, the scheming Irish chauffeur.