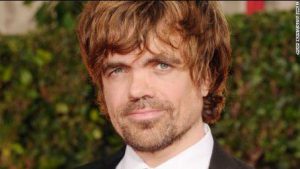 Peter is alive and kicking and is currently 53 years old.
Please ignore rumors and hoaxes.
If you have any unfortunate news that this page should be update with, please let us know using this .

Does Peter Dinklage Have the coronavirus?

Peter Dinklage is an American actor. Since his breakout role in The Station Agent (2003), he has appeared in numerous films and theatre plays. Since 2011, Dinklage has portrayed Tyrion Lannister in the HBO series Game of Thrones. For this he won an Emmy for Outstanding Supporting Actor in a Drama Series and a Golden Globe Award for Best Supporting Actor - Series, Miniseries or Television Film in 2011.
In 2005, Dinklage married Erica Schmidt, a theater director. The name of their daughter, born in 2011, has not been revealed publicly, and Dinklage has denied media reports that the girl's name is "Zelig." As of March 2, 2017, Dinklage and Schmidt are expecting a second child.

Dinklage's face was injured in the early 1990s, when he was in a "punk-funk-rap" band called Whizzy. It gave him a scar that runs from his neck to his eyebrow. The accident happened while he was playing at the nightclub CBGB in New York City, where he was accidentally kneed in the face and then started bleeding on the stage.
In 2008, Dinklage described himself as a lapsed Catholic. Dinklage has been a vegetarian since the age of 16. An advocate for animal rights, he supports Farm Sanctuary and has served as the spokesperson for the organization's Walk for Farm Animals. He also narrated the video Face your Food, a film on behalf of PETA advocating a vegan diet on ethical grounds. In 2017, Dinklage attended the Women's March demonstration in Park City, Utah, to advocate legislation and policies regarding human rights and other issues. When asked about the news that president Donald Trump is reportedly ending the funding for national arts and humanities programs, Dinklage responded: "It's always the first to go, isn't it? Art, then education: the two most important things," along with "climate, of course."
Dinklage has a form of dwarfism, achondroplasia, which affects bone growth. As a result, he is 4 feet 5 inches (135 cm) tall, with a typical-sized head and torso but short limbs. While Dinklage has come to accept his condition, he sometimes found it challenging when growing up. In 2003, he said that when he was younger he was often angry and bitter about his condition, but as he got older, he realized that he "just ha to have a sense of humor," to know "that it's not your problem. It's theirs." When asked in 2012 whether he saw himself as "a spokesman for the rights of little people," Dinklage responded: "I don't know what I would say. Everyone's different. Every person my size has a different life, a different history. Different ways of dealing with it. Just because I'm seemingly okay with it, I can't preach how to be okay with it." Dinklage has been viewed as a role model for people sharing his condition.
At the 2012 Golden Globe ceremony, when Dinklage won the award for Best Supporting Actor – Series, Miniseries or Television Film, he told the audience that he had been thinking about "a gentleman, his name is Martin Henderson," and suggested that they Google his name. Henderson is a person with dwarfism from England, who was badly injured by being tossed by a rugby fan in a bar. The speech by Dinklage brought media and public attention to the act of dwarf-tossing with Henderson's name being trended worldwide on social media. Dinklage turned down offers from talk shows to discuss the topic. He later explained that 20 years earlier he might have accepted these offers but that he's a "little bit more at peace with things now and I—said what I wanted to say. I have a friend who says the world doesn't need another angry dwarf."