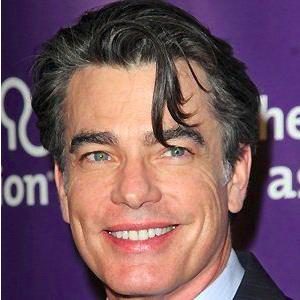 Peter is alive and kicking and is currently 66 years old.
Please ignore rumors and hoaxes.
If you have any unfortunate news that this page should be update with, please let us know using this .

Does Peter Gallagher Have the coronavirus?

Peter Killian Gallagher is an American actor, musician and writer. Since 1980, Gallagher has played roles in numerous Hollywood films. He is best known for starring as Sandy Cohen in the television drama series The O.C. from 2003 to 2007, and a recurring role as Deputy Chief William Dodds on Law & Order: Special Victims Unit.Early life Gallagher was born in Manhattan, New York City. His mother, Mary Ann, was a bacteriologist, and his father, Thomas Francis Gallagher, Jr., was an advertising executive. Gallagher is the youngest of their three children. He is of Irish Catholic background and was raised in Armonk, New York. Gallagher graduated from Tufts University, where he had been active in theater, appearing in such shows as Stephen Sondheim's Company and singing with the all-male a cappella group the Beelzebubs.Career Gallagher appeared on Broadway with Glenn Close in Tom Stoppard's The Real Thing, but first achieved fame for his role in Steven Soderbergh's Sex, Lies, and Videotape (1989). He also starred as Sky Masterson in the 1992 Broadway hit revival of Guys and Dolls.Gallagher played a potential career threat to Tim Robbins' studio executive in The Player (1992); the comatose fiancé of Sandra Bullock in While You Were Sleeping (1995); a real estate salesman having an affair with Annette Bening in American Beauty (1999); a media executive in Mr. Deeds (2002); and a political reporter exposing media ethics during a presidential debate in The Last Debate.From 2003 to 2007, Gallagher starred as Sandy Cohen, a Jewish public defender and corporate lawyer, on the Fox television show The O.C.. He hosts an annual award ceremony named "The Sandy Cohen Awards" or The Sandys, which, in honor of his character on The O.C., gives a scholarship to a law school student at UC Berkeley who wants to become a public defender.Gallagher released an album entitled 7 Days in Memphis in 2005, on the Sony BMG label. This includes a studio recording of his performance of "Don't Give Up On Me" (originally by Solomon Burke), which was featured in an episode of The O.C. He also has a video for his single "Still I Long For Your Kiss", in which he starred with his TV-wife Kelly Rowan.In 2005, Gallagher received the P.T. Barnum Award from Tufts University for his exceptional work in the field of media and entertainment. In 2007, Gallagher received the "Light on the Hill" award at Tufts University. The award is given to notable alumni from Tufts who have demonstrated ambition, achievement, and active citizenship.As of March 2015, Gallagher is co-starring on Broadway in On the Twentieth Century.Personal life Gallagher is married to Paula Harwood and has two children, James and Kathryn. His daughter Kathryn is an actress and singer, and most recently performed in Deaf West's production of Spring Awakening on Broadway as the voice of Martha.