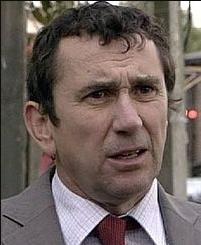 Phil is alive and kicking and is currently 63 years old.
Please ignore rumors and hoaxes.
If you have any unfortunate news that this page should be update with, please let us know using this .

Does Phil Daniels Have the coronavirus?

Philip William "Phil" Daniels (born 25 October 1958 in Islington) is an English actor, most noted for film and television roles as Londoners such as Jimmy Cooper in Quadrophenia, Richards in Scum, Stewart in The Class of Miss MacMichael, Danny in Breaking Glass, Mark in Meantime, Billy the Kid in Billy the Kid and the Green Baize Vampire, Kevin Wicks in EastEnders, DCS Frank Patterson in New Tricks and Grandad Trotter in the Only Fools and Horses prequel Rock & Chips. He is also known for featuring on Blur's 1994 hit single "Parklife".
He made his film debut in 1972 in Anoop and the Elephant. He had an incidental appearance (with fellow drama students) in 1975 in Thames Television's You Must Be Joking! In 1976, at the age of 17, he featured as a waiter in Bugsy Malone. Also in 1976 he had significant roles in three television series: The Molly Wopsies, Four Idle Hands, and The Flockton Flyer. Over the following four years he appeared in Quadrophenia, Breaking Glass and Scum. He also appeared in the 1970s TV drama serial Raven.

Daniels has performed on stage with the Royal Shakespeare Company in plays such as The Merchant of Venice, The Jew of Malta and A Clockwork Orange. In 2004 he appeared in the BBC comedy-drama Outlaws as a criminal solicitor. In 2006 he joined the cast of the popular BBC soap opera EastEnders playing Kevin Wicks. The actor temporarily left the show in early 2007, however, he returned in March 2007. On 18 August 2007, it was revealed in The Sun that Daniels was to leave the show. His character died in a car crash on 31 December 2007.
Daniels had a long-term relationship with Jan Stevens, who died of pancreatic cancer in 2012. They had one daughter, Ella.