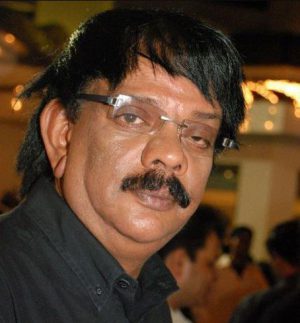 Priyadarshan is alive and kicking and is currently 65 years old.
Please ignore rumors and hoaxes.
If you have any unfortunate news that this page should be update with, please let us know using this .

Does Priyadarshan Have the coronavirus?

Priyadarshan Soman Nair is an Indian film director, producer, and screenwriter. In a career spanning almost three decades, Priyadarshan has directed over 80 films in several Indian languages predominantly in Malayalam and Hindi languages, besides making 4 films in Tamil and 2 films in Telugu.
Though he began his career in Malayalam cinema in 1984, Priyadarshan has been mainly active in Hindi cinema for 2001-2010. He has done about 31 films in Hindi alone. This is the highest number of films done by a Bollywood director after David Dhawan. However, in 2013, he announced Rangrezz would be his last Hindi film for a while; and he is shifting focus to Malayalam Cinema.

Priyadarshan has won awards both from the State and Central government for his movies. His offbeat film Kanchivaram was adjudged the best feature film at the 2007 National Film Awards. He made a period epic film titled Kaalapani, in Malayalam, which told the story of freedom fighters in the jail at Andaman and Nicobar Islands; it starred Mohanlal, Tabu, Prabhu Ganesan and Amrish Puri, and received four National Film Awards, including awards for Santosh Sivan (cinematography) and Sabu Cyril (art direction). The film was dubbed and released in other languages such as Tamil, Telugu and Hindi.
Priyadarshan fell in love with popular actress Lissy and married her on 13 December 1990. After marriage, Lissy gave up acting and adopted the name Lakshmi for religious reasons. After the birth of their son, Lissy converted to Hindu religion from Arya Samaj. Their daughter Kalyani studied in New York City and son Siddharth studied in San Francisco. The couple got divorced in 2014.