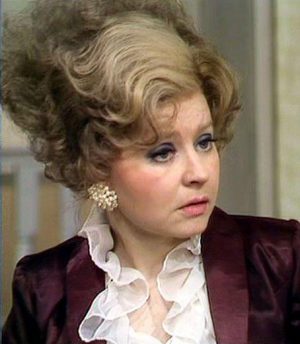 Prunella is alive and kicking and is currently 90 years old.
Please ignore rumors and hoaxes.
If you have any unfortunate news that this page should be update with, please let us know using this .

Does Prunella Scales Have the coronavirus?

Prunella Scales is an English actress best known for her role as Basil Fawlty's wife Sybil in the BBC comedy Fawlty Towers and her BAFTA award-nominated role as Queen Elizabeth II in A Question of Attribution by Alan Bennett.
Her career break came with the early 1960s sitcom Marriage Lines starring opposite Richard Briers. In addition to Fawlty Towers, she has had roles in BBC Radio 4 sitcoms, and comedy series including After Henry, Smelling of Roses and Ladies of Letters; on television she starred in the London Weekend Television/Channel 4 series Mapp & Lucia based on the novels by E. F. Benson. She played Queen Elizabeth II in Alan Bennett's A Question of Attribution.

Scales is married to the actor Timothy West, with whom she has two sons; the elder is actor and director Samuel West. Their younger son Joseph participated in two episodes of Great Canal Journeys filmed in France. She also has a step daughter, Juliet, by West's first marriage.
In January 2013, Scales told the Daily Mail that her short term memory was fading. In addition, she could not remember the year of birth of her two sons, nor when she and Timothy West married. In March 2014, her husband told The Guardian that Scales was living with Alzheimer's disease. The couple discussed practical measures in a radio programme about age and dementia on BBC Radio 4 in December 2014.
In June 2018, her husband characterized her short-term memory as "no good at all", and admitted her condition "slowed them down", but "not so it closes up opportunities."