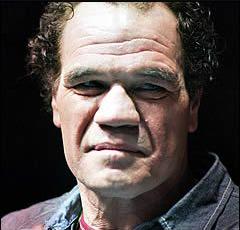 Randall is alive and kicking and is currently 68 years old.
Please ignore rumors and hoaxes.
If you have any unfortunate news that this page should be update with, please let us know using this .

Does Randall Cobb Have the coronavirus?

Randall Craig "Tex" Cobb (born December 10, 1953) is an American former professional boxer who competed in the heavyweight division. Widely considered to possess one of the greatest chins of all time, Cobb was a brawler who also packed considerable punching power. He began his fighting career in full contact kickboxing in 1975 before making the jump to professional boxing two years later. He challenged Larry Holmes for the WBC heavyweight title in November 1982, losing a one-sided unanimous decision, and took wins over notable heavyweights of his era such as Bernardo Mercado, Earnie Shavers, and Leon Spinks.
After nine straight wins as a kickboxer, Cobb lost his first two amateur bouts. In his professional-boxing debut on January 19, 1977, in El Paso, he knocked out Pedro Vega. He went on to win 13 straight fights by 1979, all by knockout. Cobb was a fighter who had hitting power, as shown by his eighth-round knockout victory over Earnie Shavers in 1980. He lost his two following bouts to Ken Norton and Michael Dokes, respectively, but soon bounced back to earn a shot at Larry Holmes' WBC World Heavyweight Championship. On November 26, 1982, at Houston's Astrodome, Cobb was defeated in a unanimous decision by Holmes, who won all 15 rounds on two of three scorecards. The bloody one-sidedness of the fight, which came 13 days after the bout between Ray Mancini and Duk Koo Kim that led to Kim's death four days later due to brain trauma, horrified sportscaster Howard Cosell so much that he vowed never to cover another professional match, which Cobb jokingly referred to as his "gift to the sport of boxing." When prodded further regarding Cosell's remarks, Cobb observed, "Hey, if it gets him to stop broadcasting NFL games, I'll go play football for a week, too!"

Cobb lives in Philadelphia, and maintained a friendship with Philadelphia Daily News columnist Pete Dexter, who frequently commented on boxing. In a notorious 1981 Grays Ferry incident, Cobb came to the defense of Dexter, who during the course of a bar brawl, was severely beaten. Cobb rescued him and endured a broken arm, costing him a scheduled fight with Muhammad Ali. Ali then fought Trevor Berbick and lost.
In January 2008, at age 57, Cobb graduated magna cum laude from Temple University with a bachelor's degree in sport and recreation management. He remarked that it was odd to hear the cheers of a packed arena without being in a boxing ring. "It was nice to have that opportunity to wear a robe, to step up there and not have to worry about bleeding", Cobb said. Cobb's eldest son Bo was killed in an accident in early 1999. His younger son Joshua pursued a short career as a boxer.