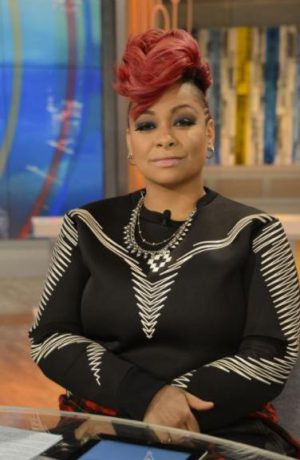 Raven-Symone is alive and kicking and is currently 36 years old.
Please ignore rumors and hoaxes.
If you have any unfortunate news that this page should be update with, please let us know using this .

Does Raven Symoné Have the coronavirus?

Is Raven Symoné's father, Christopher B. Pearman, dead or alive?

Christopher B. Pearman's information is not available now.

Raven-Symoné Christina Pearman is an American actress, comedian, model, singer, songwriter, dancer, television producer and talk show host. She first appeared on television in 1989 on The Cosby Show as Olivia Kendall. She released her debut album, Here's to New Dreams in 1993; the single, "That's What Little Girls Are Made Of" charted number 68 on the US Billboard Hot 100. The next album, Undeniable, was released on May 4, 1999.
Regarding her sexual orientation, Pearman wrote on Twitter in May 2012: "My sexual orientation is mine, and the person I'm dating to know. I'm not one for a public display of my life." In August 2013, Pearman commented on legalizing same-sex marriage, "I was excited to hear today that more states legalized gay marriage. I, however am not currently getting married, but it is great to know I can now, should I wish to."

In 2013, she briefly retired from acting and enrolled at Academy of Art University to pursue a degree in fine arts, which she completed in 2018.
In an October 2014 interview with Oprah Winfrey, she acknowledged being in an "amazing, happy relationship" with her female partner. She also described looking at both boys and girls as possible romantic interests at the age of twelve. In the same interview, Pearman explained that she rejects labels in all aspects of her life. Despite her racial origin and her same-sex relationship, she refuses to self-identify as either African-American or gay, but as an "American" and as a "human who loves humans."
In 2015, Pearman introduced her partner AzMarie Livingston. She came out of retirement after joining The View. On October 20, 2015, Pearman announced that she had broken up with AzMarie after a three-year relationship. In 2016, she referred to herself as a lesbian on The View.