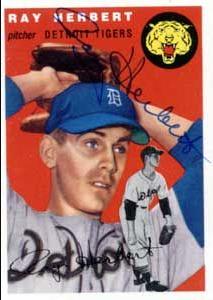 Raymond is alive and kicking and is currently 93 years old.
Please ignore rumors and hoaxes.
If you have any unfortunate news that this page should be update with, please let us know using this .

Raymond Ernest Herbert (born December 15, 1929, in Detroit, Michigan) was a pitcher in Major League Baseball who played fourteen seasons with the Detroit Tigers, Kansas City Athletics, Chicago White Sox, and Philadelphia Phillies. He won 20 games with the White Sox in 1962 and was selected to play in the All-Star game. The following season, he led the American League in shutouts thrown (7). In 407 career games, Herbert had a won-loss record of 104-107 with 68 complete games and 13 shutouts.