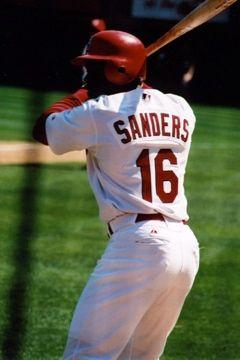 Reginald is alive and kicking and is currently 55 years old.
Please ignore rumors and hoaxes.
If you have any unfortunate news that this page should be update with, please let us know using this .

Reginald Laverne Sanders (born December 1, 1967) is a former right fielder in Major League Baseball. He bats and throws right-handed. Sanders was 24 years old when he made his major league debut on August 22, 1991, after being selected in the 7th round of the 1987 amateur draft by the Cincinnati Reds. He attended Spartanburg Methodist College before beginning his pro career with the Rookie-level Billings Mustangs of the Pioneer League in 1988. He also played professionally with the St. Louis Cardinals, Pittsburgh Pirates, Atlanta Braves, San Francisco Giants, San Diego Padres and Kansas City Royals, and was a member of the Arizona Diamondbacks' 2001 World Series champions. With the Cardinals, Sanders had a breakout of sorts during the 2005 National League Division Series against the San Diego Padres. In a three-game sweep of the Padres, Sanders had 10 runs batted in, a new record for a division series.