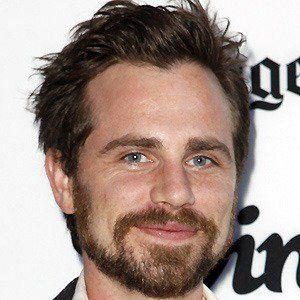 Rider is alive and kicking and is currently 42 years old.
Please ignore rumors and hoaxes.
If you have any unfortunate news that this page should be update with, please let us know using this .

Does Rider Strong Have the coronavirus?

Rider King Strong is an American actor, director, producer and screenwriter. He is best known for his role as Shawn Hunter on the 1990s sitcom Boy Meets World and its 2014 sequel Girl Meets World.
Strong began his acting career at the age of nine, when he starred as Gavroche in the San Francisco production of Les Misérables. After the stage production, he appeared in small screen roles on television. In 1992, he received his first regular television series role as Julie Andrews's son on Julie. When the series was canceled, Strong made his debut on film as Amy Irving's son in Benefit of the Doubt. It was not until he was chosen for the role of Shawn Hunter in the ABC series Boy Meets World that he received widespread recognition.

In April 2008, Strong, along with his brother Shiloh and his then-girlfriend (now wife) actress Alexandra Barreto, co-created a 30-second television ad in support of Democratic presidential candidate Barack Obama titled, "It Could Happen to You." The ad, submitted to MoveOn.org, became one of 15 finalists from a pool of over 1,100 submitted ads, and was chosen as the funniest ad in May 2008. In August, MoveOn raised $200,000 to air the ad on MTV and Comedy Central; it was the first political commercial to ever appear on Comedy Central. In early 2009, Strong narrated the audiobook of The Obama Revolution by Alan Kennedy-Shaffer. In 2010, Strong starred in the science fiction-thriller film The Darkening Sky alongside Ezra Buzzington, Charley Rossman, Sally Berman, Daniel Kirschner and LaShan Anderson under the direction of Victor Bornia.
In 2004, Strong graduated magna cum laude from Columbia University as an English major. Before Columbia, Strong attended Occidental College. He completed his Master of Fine Arts degree in June 2009 at Bennington College.
Strong began dating actress Alexandra Barreto after they met while filming the 2006 television series Pepper Dennis. They became engaged in December 2012, and married on October 20, 2013 in Oregon. The couple has one son, Indigo "Indy" Barreto Strong, born in December 2014.