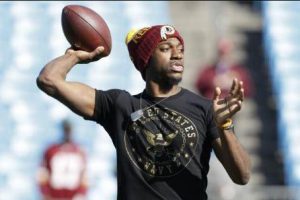 Robert is alive and kicking and is currently 32 years old.
Please ignore rumors and hoaxes.
If you have any unfortunate news that this page should be update with, please let us know using this .

Does Robert Griffin III Have the coronavirus?

Robert Griffin III's mother, Jacqueline, is still alive and kicking at the age of 57.

Robert Lee Griffin III, nicknamed RG3, is an American football quarterback who is currently a free agent. He played college football at Baylor, where he won the 2011 Heisman Trophy, and was drafted by the Washington Redskins second overall in the 2012 NFL Draft. Griffin won the 2012 NFL Offensive Rookie of the Year award.