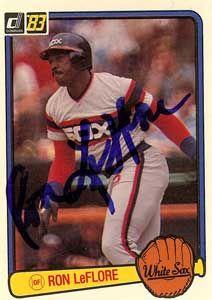 Ronald is alive and kicking and is currently 74 years old.
Please ignore rumors and hoaxes.
If you have any unfortunate news that this page should be update with, please let us know using this .

Does Ron LeFlore Have the coronavirus?

Ronald LeFlore (born June 16, 1948) is a former Major League Baseball outfielder. He played six seasons with the Detroit Tigers before being traded to the Montreal Expos, retiring as a Chicago White Sox in 1982. He stole 455 bases in his career, and was an American League All-Star selection in 1976. A movie and book were made about his rise to the major leagues after being an inmate at the Jackson State Penitentiary. One in a Million: The Ron LeFlore Story was a made-for-television movie starring LeVar Burton that aired on CBS in 1978. LeFlore is the cousin of former MLB outfielder Todd Steverson.
Incarcerated on April 28, 1970, the first organized baseball league LeFlore played in was for inmates. Jimmy Karalla, a fellow inmate who was imprisoned for extortion, convinced his longtime friend Jimmy Butsicaris who co-owned a Detroit bar frequented by Detroit sports celebrities, to speak to his good friend Billy Martin, then manager of the Detroit Tigers, to ask him to observe LeFlore. Martin visited Jackson State Prison on May 23, 1973. Martin then helped LeFlore get permission for day-parole and a tryout at Tiger Stadium in June.

In 1099 games over nine seasons, Leflore posted a .288 batting average (1283-for-4458) with 731 runs, 172 doubles, 57 triples, 59 home runs, 353 RBI, 455 stolen bases, 363 bases on balls, .342 on-base percentage and .392 slugging percentage. He finished his career with a .968 fielding percentage playing at center and left field.
In the summer of 2011 LeFlore had his right leg amputated from the knee down due to complications caused by arterial vascular disease, a result of his having smoked cigarettes since he was a teenager, and lost 100 pounds as a result of three surgeries. He now limps with a prosthetic leg. He lives in St. Petersburg, Florida.