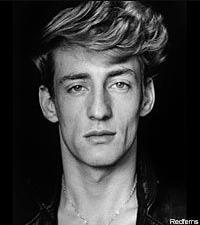 Rory Storm (7 January 1938 – 28 September 1972) was an English musician and vocalist. Born Alan Ernest Caldwell in Liverpool, Storm was the singer and leader of Rory Storm and the Hurricanes, a Liverpudlian band who were contemporaries of the Beatles in the late 1950s and early 1960s. Ringo Starr was the drummer for the Hurricanes before joining the Beatles in August 1962, replacing original drummer Pete Best.