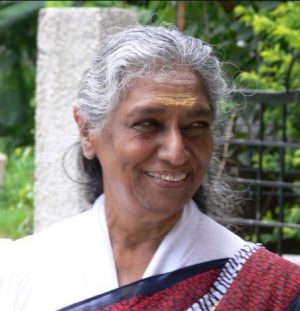 S is alive and kicking and is currently 84 years old.
Please ignore rumors and hoaxes.
If you have any unfortunate news that this page should be update with, please let us know using this .

Sishtla Sreeramamurthy Janaki, (తెలుగు : ఎస్.జానకి), (ಕನ್ನಡ : ಎಸ್.ಜಾನಕಿ), (தமிழ் : எஸ்.ஜானகி), (മലയാളം : എസ്.ജാനകി ), (born 23 April 1938), commonly known as S. Janaki, is a versatile Indian Playback singer. As of 2007 Janaki had sung nearly 17,000 songs, encompassing most of the languages of South India, during a career that has lasted over 50 years. She confirmed in a speech while receiving the second highest civilian award of Karnataka state, Karnataka Rajyotsava Award, that the highest number of songs that she sang was in Kannada. She was very active in Telugu and Tamil film industries too. She has won four National Film Awards and 31 different State Film Awards. Her association with singer S. P. Balasubrahmanyam and composer Ilaiyaraaja is among the most popular musical combinations in South India.
S.Janaki was born on 23 April 1938 in a Telugu-speaking family in Pallapatla, Repalle Taluka, in Guntur, Madras Presidency, British India (now in Andhra Pradesh).

In her twenties, Janaki moved to Chennai on the advice of her uncle, joining AVM Studios as a singer. She started her career as a playback singer in the Tamil movie Vidhiyin Vilayattu in 1957. Subsequently, she performed in the Telugu movie called MLA. She picked a Malayalam lullaby "Amma poovinum..." from 10 Kalpanakal as her swansong of her 60 year singing career and retired on 28 October 2017 with a concert held at Mysuru.
Janaki married V. Ramprasad in 1958; he died in 1997. Later, she lived in Hyderabad with her son Murali Krishna.