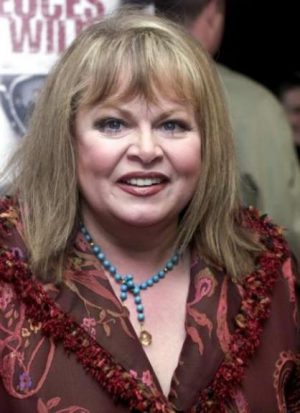 Sally is alive and kicking and is currently 74 years old.
Please ignore rumors and hoaxes.
If you have any unfortunate news that this page should be update with, please let us know using this .

Does Sally Struthers Have the coronavirus?

Sally Anne Struthers is an American actress and spokeswoman, best known in the United States for her roles as Gloria Stivic on All in the Family, for which she won two Emmy awards, and as Babette on Gilmore Girls, and elsewhere for her portrayal in South Park. She was the voice of Charlene Sinclair on the ABC sitcom Dinosaurs and Rebecca Cunningham on the Disney animated series TaleSpin.
Sally Anne Struthers was born on July 28, 1947 in Portland, Oregon, and attended Grant High School. She is one of two children. She has a sister, Sue. Their parents are Margaret Caroline (née Jernes) and Robert Alden Struthers, a surgeon, who left the family when Sally was 9 or 10 years old. Her maternal grandparents were Norwegian immigrants.

Struthers has been a spokesperson for Christian Children's Fund (later renamed ChildFund), advocating on behalf of impoverished children in developing countries, mainly in Africa, and has been the spokesperson for International Correspondence Schools in television ads, pitching the famous line "Do you want to make more money? Sure, we all do!". Her activism has been satirized in Episode 19 of the seventh season of Grey's Anatomy, 3 Episodes of In Living Color: Season 3 Episodes 6 & 18 and Season 4 Episode 27, the South Park episodes "Starvin' Marvin" and "Starvin' Marvin in Space", and the Denis Leary song Voices in my Head.
Struthers married psychiatrist William C. Rader on December 18, 1977. After having one child, daughter Samantha, the couple divorced on January 19, 1983.