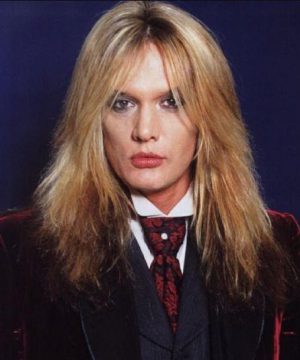 Sebastian is alive and kicking and is currently 54 years old.
Please ignore rumors and hoaxes.
If you have any unfortunate news that this page should be update with, please let us know using this .

Sebastian Bach was born on April 3, 1968 in Freeport, Bahamas as Sebastian Phillip Bierk. He is an actor, known for Rush: Beyond the Lighted Stage (2010), Rock of Ages (2012) and Final Rinse (1999). He has been married to Minnie Gupta since April 4, 2012. He was previously married to Maria Bierk.Trivia (14)Raised in CanadaFormer lead singer of the metal band Skid RowBrother of actress Dylan BierkBrother Zac Bierk is a professional goaltender and has played in the NHL with the Tampa Bay Lightning and the Minnesota Wild.His father is David Bierk, a founding member and the Director of Peterborough's Artspace (1974-1987) and artist.Used to be a choir boy.Skid Row's 1991 album, "Slave to the Grind", debuted at #1 on the Billboard charts. It was the first metal album to do so. It sparked more metal albums to debut at #1, including Guns N' Roses "Use Your Illusion" albums.He got into trouble after wearing a T-shirt that read, "AIDS Kills Fags Dead". He later apologized on MTV for wearing the shirt and showing poor judgment.Wrote the lyrics for the Skid Row song "Wasted Time" about his friend Steven Adler, who was the original drummer for Guns N' Roses.Ted Nugent led an intervention on the VH1 reality show Supergroup (2006) and Bach gave up alcohol. Nugent promised to "kick the sh*t out of" him if he ever drank again. Later during the finale of the show Sebastian brought out a bottle of Jack Daniels whiskey and began guzzling it. Then he put some of the drink on Nugent's face and it was revealed that the bottle was filled with iced tea. Sebastian had done this as a joke.Has 2 sons, Paris Francis Muir Bach (born March 4, 1988) and London Siddhartha Halford Bach (born January 17, 1994), and a daughter, Sebastiana Maria Chantal Bach (born July 15, 2007) with Maria Bierk.Since the summer of 2000, he has been starring in Broadway musicals such as 'Jekyll and Hyde', and most recently, as of November 1, 2002, he's been signed to perform as Jesus Christ in the touring company of 'Jesus Christ Superstar'. [June 2000]Presently touring Australia with Guns 'n Roses (June 2007).Appeared in 'Jesus Christ Superstar' playing the title role on tour until he was fired in April 2003 for diva-like behavior. He is working on a June release of the "Forever Wild" DVD and also has a new band called the Bach Tight 5. [May 2004]Personal Quotes (1)If I ever grow up, I don't want to be around for it.Miscellaneous SitesA.V. Club - Interview (June 17, 1998)Baz FansLucy Lyrics - list of albums and songsLucyWho.com - Trivia, Quotes, Trailers, Posters, PhotosPhotographsAce Photos - photo galleryAll Star Pics - picture galleryFanPix.Net - galleryGoogle.com - Pictures