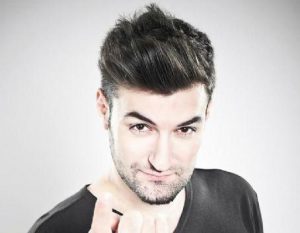 How Old Is Smiley? Smiley Birthday

Smiley is alive and kicking and is currently 39 years old.
Please ignore rumors and hoaxes.
If you have any unfortunate news that this page should be update with, please let us know using this .

Andrei Tiberiu Maria (born 27 July 1983 in Pitești), better known by his stage name Smiley is a Romanian singer, songwriter, composer and record producer. He is part of the band Simplu and has developed a solo career. In 2013, he won "Best Romanian Act" during the MTV Europe Music Awards held in Amsterdam. He had been nominated as a solo act three times for the same award in 2008, 2009 and 2011 and twice in 2006 and 2007 as part of Simplu. He is also part of the Romanian Euro-House project Radio Killer where he is known as Killer 1. As of November 2013, he is the new Goodwill Ambassador for UNICEF Romania. He is also a television personality having hosted Românii au talent for four consecutive seasons (2011–2014) and being a coach in Vocea României also for three consecutive seasons (2011–2013).