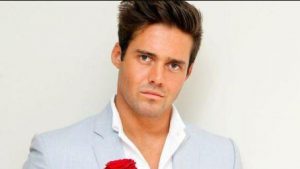 Spencer is alive and kicking and is currently 34 years old.
Please ignore rumors and hoaxes.
If you have any unfortunate news that this page should be update with, please let us know using this .

Does Spencer Matthews Have the coronavirus?

Spencer George Matthews is a British socialite, reality television personality and author. He is best known for appearing on the British TV shows Made in Chelsea, I'm a Celebrity...Get Me Out of Here!, The Bachelor and The Jump.