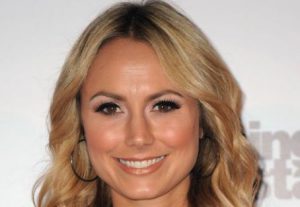 Stacy is alive and kicking and is currently 42 years old.
Please ignore rumors and hoaxes.
If you have any unfortunate news that this page should be update with, please let us know using this .

Does Stacy Keibler Have the coronavirus?

Stacy Ann-Marie Keibler is an American actress, model, and former cheerleader, and professional wrestler and valet, specifically for her work with World Championship Wrestling and World Wrestling Entertainment (WWE) as a WWE Diva.
She began her professional wrestling career as a part of the Nitro Girls in WCW. She quickly moved on to a more prominent role in the company as the manager Miss Hancock. As Miss Hancock, she was known for doing table dances, her relationship with David Flair, and a pregnancy angle. After WCW was purchased by the WWF (later WWE) in 2001, she moved to the new company, using her real name and taking part in the Invasion storyline, also managing the Dudley Boyz. Keibler also managed Test and Scott Steiner. Before her departure from WWE in 2006, she was affiliated with The Hurricane and Rosey and nicknamed "Super Stacy."

From 1996 to 1999, her then boyfriend, Kris Cumberland, was a wrestling fan who first got her interested in wrestling. In 2000, after winning $10,000 in the contest to become a part of the Nitro Girls, Keibler used the money to buy season tickets for the Baltimore Ravens, the team for which she used to cheer. In 2000, Keibler dated David Flair during their time together in WCW.
From 2001–2005, Keibler dated Andrew "Test" Martin while they both worked together in the WWF/WWE. Keibler moved to Los Angeles in 2004, where she was roommates with Torrie Wilson. Keibler and Geoff Stults were part-owners of the now defunct Hollywood Fame, a 2006 expansion franchise of the new American Basketball Association. Keibler started dating George Clooney in July 2011. Clooney and Keibler ended their relationship in July 2013.
Keibler began dating Future Ads CEO Jared Pobre in fall 2013, though they had been friends for several years previously. They were married on March 8, 2014 in Mexico. They have one daughter, Ava Grace Pobre, born on August 20, 2014, and one son, Bodhi Brooks, born on June 18, 2018.