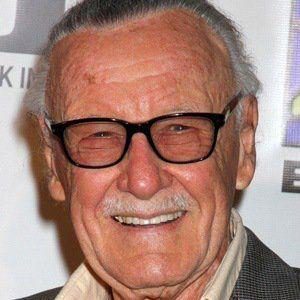 Stan Lee is an American comic book writer, editor, publisher, media producer, television host, actor, and former president and chairman of Marvel Comics. In collaboration with several artists – particularly Jack Kirby and Steve Ditko – he co-created fictional characters including Spider-Man, the Hulk, Doctor Strange, the Fantastic Four, Daredevil, Black Panther, the X-Men, and – also with co-writer Larry Lieber – the characters Ant-Man, Iron Man, and Thor. In doing so, he pioneered a more complex approach to writing superheroes in the 1960s, and in the 1970s challenged the standards of the Comics Code Authority, indirectly leading to it updating its policies.
Lee was inducted into the comic book industry's Will Eisner Award Hall of Fame in 1994 and the Jack Kirby Hall of Fame in 1995. He received a National Medal of Arts in 2008.