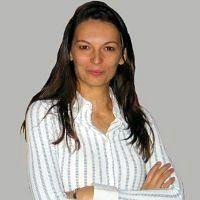 Stephanie is alive and kicking and is currently 49 years old.
Please ignore rumors and hoaxes.
If you have any unfortunate news that this page should be update with, please let us know using this .

Stephanie Batailler's stories are like her: between 2 countries (France and the US) and 2 passions (books and cinema.)Born and raised in France, Stephanie Batailler spent her childhood between the French Alps and the South of France -which fed her overactive imagination with great settings and inspired her to start writing fantastic tales.At 23, she graduated with a Master's degree in History from the Sorbonne University in Paris and moved to New York where she studied Film Production. In 2003, she received the New School University Award for Excellence in Experimental Film. After school, she worked independently in the Big Apple as a producer, director, and camera operator.In November 2011, Stephanie packed her bags one more time and left New York for the sunny West Coast.She first started to teach ESL in a private language school in Hollywood. Teaching English to immigrants is something that Stephanie particularly enjoys doing. She likes to pass on her experience -as a few years ago, she herself was an ESL student.Stephanie is now pursuing a career in writing and story development in the entertainment industry in Los Angeles, California.Stephanie has won awards and received nominations in film, screenwriting and songwriting: "The format doesn't matter...a short story, a script, or lyrics...it's all about telling stories, and I love to do that!"When not writing books, scripts, or lyrics, you can find her recording songs as Skyebat, cooking, playing badminton, or hiking in Griffith Park.For more information, please visit