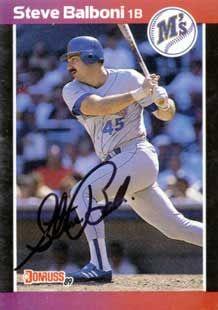 Stephen is alive and kicking and is currently 65 years old.
Please ignore rumors and hoaxes.
If you have any unfortunate news that this page should be update with, please let us know using this .

Stephen Charles Balboni (/bælˈboʊni/; born January 16, 1957) is a retired Major League Baseball player with the New York Yankees, Seattle Mariners, Kansas City Royals, and Texas Rangers. He was a player with home run power and a tendency to strike out. He was nicknamed "Bye Bye" because of his home run hitting prowess. He was also known by the nickname "Bones", which is a malapropism for Balboni.